​​WHAT ARE 'SPECIAL FOUNDATIONS'?

​Section 20  of the Party Wall Act defines 'Special Foundations' as :

Section 7(4) States that "Special Foundations" may  not be placed on a neighbour's land without  the neighbour;s consent in writing.

REINFORCED CONCRETE UNDERPINNING FOR A BASEMENT?

Recently surveyors have assumed that  Reinforced Concrete underpinning is a "Special Foundation". This has created a situation where neighbours can prevent the underpinning of a Party Wall with no justified reason or can 'lever'  payment or other benefit from a neighbour as the price of giving consent.

WHAT were the authors of the act thinking about ?

David Bowden FRICS has researched and obtained meeting notes  of the  committee responsible for the 1939 Act (predecessor to the current Act). This document clearly show that the  type of foundations envisaged were Grillage Foundations which are an assemblage of beams or rods is employed for the purpose of distributing load. David Bowden has summerised his findings in a paper.

For some time Party Wall Surveyors have (In our opinion, wrongly) assumed that Reinforced Concrete (RC) foundations and underpinning structures are 'Special Foundations' which  require a neighbour's consent if they are to be located on the neighbour's side of a boundary.

WHAT ABOUT REINFORCED CONCRETE ?

Reinforced Concrete is not an "assemblage of beams or rods". It is interesting that the definition in Section 20  of the Act does not even mention concrete. That  is because the type of 'special' foundation envisaged by the Act is a steel Grillage Foundation. The concrete encasement to a grillage foundation is just to protect the steel from corrosion, It has no structural role. Whereas, without concrete the residual reinforcement bars in a RC walls have no structural effect, they are an ingredient of the concrete to improve its ability to resist tensile loads and do  not act independently as a structural element to "distribute load".

This is what a Grillage Foundation looks like. These used to be used to support the columns of steel framed buildings. These days we would use piles. Interestingly this looks like an assemblage of beams and rods and these are certainly intended to distribute load. 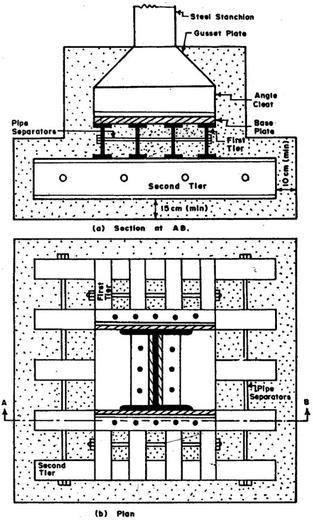